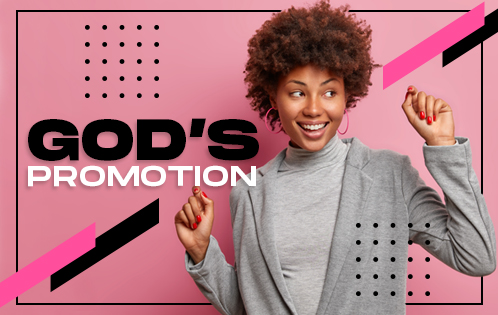 Eyes haven’t seen and ears haven’t heard what God wants to do in your life! It’s a matter of receiving what He’s already prepared for you that is beyond human eyes and ears. For many, there are things that have never happened in your family during your lifetime—but God says it’s time for promotion. We live in a season in which God wants to show out through His people and do something unique. For so long, we’ve been accustomed to living a performance-based Christian life under the law; I can speak for myself on that. But now that we understand what it means to live under grace, we can begin to realize a far better way of living.

The promotion that is available to us started when Jesus walked the earth. His life restored, recovered, redeemed, and brought back into the earth what the enemy stole from Adam and Eve in the garden of Eden. It’s time for us to take full advantage of what Jesus accomplished on our behalf. There’s a way to progress in the natural realm. For many, that progression starts with attending K-12 school, graduation, and earning a college degree. We look to get employed and then become promoted as a natural progression in this physical world. However, God’s system of promotion is quite different. It happens supernaturally.

The word promotion is defined in Webster’s Dictionary as “the act of being raised up in position or rank; to ascend; to advance or to upgrade.” God’s promotion system can cause you to bypass natural or physical laws, and things can accelerate in ways beyond human comprehension. God upgrades, advances, and raises us up in rank. All He asks for in return is for us to recognize Him as our source for moving forward.

God can supernaturally upgrade our health when the doctors in the physical realm have given up hope after an illness. He may ascend your finances beyond debt, lack, and insufficiency. God’s system of promotion may have you going from grief to joy, from oppression to optimism, from suicidal depression to joy unspeakable and full of glory. His promotion system can move you from excruciating pain to calm and peace. It can elevate you from deficits to surplus or from the back to the front. You can go from cleaning bathroom toilets to sitting at a boardroom table. God wants to give you His unearned, undeserved, unmerited favor to promote you because you are His trophy!

There could be an expansion in your sphere of influence where God places you before those in high places. God always has a purpose when He expands your territory and brings increase to your life. He takes pleasure in promoting you so that others can be blessed and encouraged by the blessings and favor in your life. Some people are self-serving and seek to be famous or world-renowned just for the sake of being recognized. Others seek fame because they are being influenced by the wrong people, places, or things. When God shows up and begins to do something extraordinary in your life, He will use it to draw others into a relationship with Him. God decides whom He will promote for His purposes in each season. Sometimes, He will increase and ascend one person while sitting down another. Either way, whether it’s promotion season or sitting season, desire to be in a close relationship with God. Rely on His promotion system because His plans are to prosper you and not to do you any harm.